Our clients can benefit from personalized Romanian courses and lessons, Romanian translation/interpreting courses, and other Romanian language services such as translation, consulting, or project assistance.

“Honestly Gabriela is very helpful and flexible in her teachings of Romanian, I am looking forward to future lessons and would suggest anyone I know to her to learn Romanian.”

Romanian is not easy to learn — in fact, its grammar is more complex than the one of other modern Romance languages. However, once mastered, this language opens an avenue to ancient cultural surprises and a fascinating history that are truly unique in Eastern Europe. It is worth studying for personal interest; otherwise, in cities, the majority of younger Romanians will be quite fluent in English and, often, in other languages as well these days. But studying Romanian to comprehend Romania’s classical literature will offer a student some very pleasant surprises.

The standard Romanian language is spoken throughout Romania, where one will encounter fewer dialects than, for instance, in Italy. Some variations of Romanian are found in the Republic of Moldova, Transnistria, and Macedonia, too; moreover, dialects of Romanian are spoken by “Aromanian” or “Vlach” communities of Greece, Bulgaria, Serbia (Voivodina, Timoc), Bosnia, Herzegovina, and Israel. In fact, a student would find the etymological connection between words like “Wallachia”/”Valahia” (Southern Romania), Welsh, Wallonia, Wales, Vlah, Vlach to be as interesting to research as the link between words like Rome, Romania, Rum, Romance language, Romansh, Romani, Romanticism, the name Roman(ov) and … yes, even the word “romance”. Researching the pre-medieval history of Romania is even more interesting than delving into Dracula’s original legend, one might say (and, besides, there are so many other interesting legends in Romania).

In recent decades, standard Romanian has been spoken in the growing Romanian diasporas throughout the European Union. It is not largely known that the standard Romanian language is so related to standard Italian that most educated Romanians would have no problem understanding 80% of an Italian conversation with no prior Italian training. The reason for this connection goes back to Enlightenment-era nationalism when the current nation-states were carved out from the bodies of empires. Some roots of modern Romania grew from the strong Greek-Roman component of the regional elite located in Southern Romania, once known as Valahia/Wallachia, and the Black Sea Coast; the last frontiers of the Roman Empire, these ancient Thracian cultures had been afterwards colonized by Greeks, Italians, even Varangian-Vikings for a long time, undergoing changes under the Romans, the Byzantines and the Ottomans, and they have a very different flavor compared to the Center-West and Northern zones of Transylvania and Moldova (which are the other regions of Romania).

Similar to nation-building processes that took place in Italy and France, in Romania the new country was created by the local intelligentsia who worked intensively to bridge all the differences and build a unified nation with a sole Romanic language. The Romanian language was furthermore enriched in the 19th century with French and Italian neologisms and literary influences, and currently it includes many anglicisms, too. France backed up the early cultural formation of Romania and French was largely spoken by the Romanian elite before WWII.

As a 1st tip to travelers: history is always a touchy-feely subject in the Balkans and may lead to passionate discussions but also to friendships, as many Romanians have a cosmopolitan orientation (during communism, it was one of the few countries that did not dub Western movies and that actually broadcast many Western productions). Proud of their pre-communist past, Romanians have a heart-warming approach to life and conversation, offer great regional cuisines, and are happy to guide tourists to resorts in the Carpathian Mountains, along the Black Sea Coast, and in the history-rich areas of medieval monasteries and palaces. 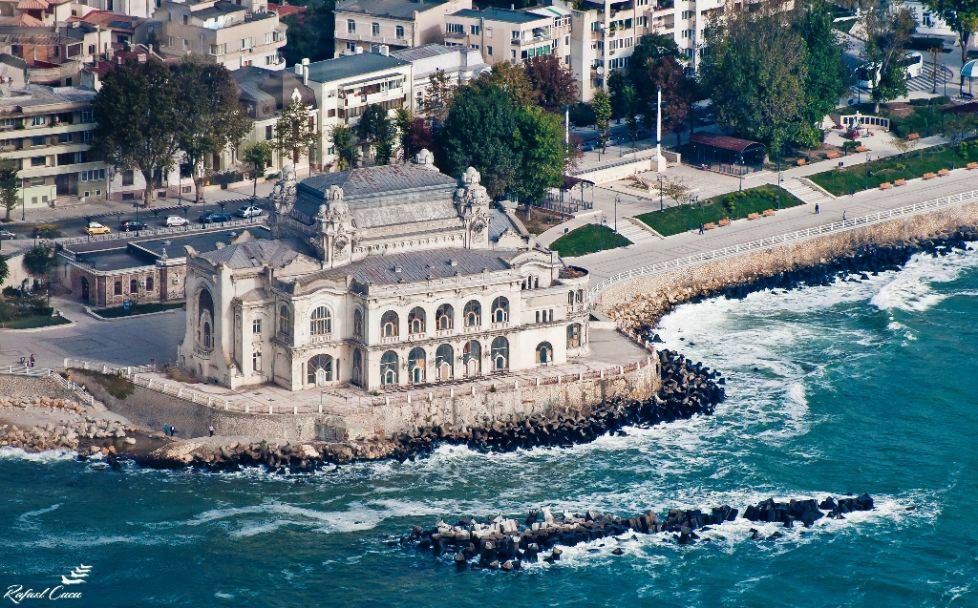 The city is located in the Dobruja region of Romania, on the Black Sea coast. It is the capital of Constanţa County and the largest city in the region…The Port of Constanţa is the largest port on the Black Sea, and one of the largest ports in Europe. Tomis (also called Tomi) was a Greek colony in the province of Scythia Minor on the Black Sea shore, founded around 600 BC for commercial exchanges with the local Getic populations. A legend is recorded by Cassiodorus  (“The origin and deeds of the Goths”) who ascribes the foundation of the city to a Getae queen: “Queen Tomyris built the city of Tomi and named it after herself.” In 29 BC. the Romans annexed it as far as the Danube, and in 8AD, the Roman poet Ovid was banished there by Augustus. Ovid lamented his exile to Tomis in his poems: “Tristia” and “Epistulae Ex Ponto”. A statue of Ovid stands in the Ovid Square of Constanţa, in front of the History Museum.